DYNAMIC ASSESSMENT OF MALOCCLUSIONS DURING CHEWING

Home/News/DYNAMIC ASSESSMENT OF MALOCCLUSIONS DURING CHEWING

DYNAMIC ASSESSMENT OF MALOCCLUSIONS DURING CHEWING

The software development process at MerloBioEngineering

Chewing is a complex phenomenon that requires coordination of the mouth districts to grind different types of bolus.

Unilateral posterior crossbite is the most frequent malocclusion present in children, characterised by a non-congruence between the upper and lower dental arch and by an altered kinematics of the chewing cycles. The evaluation of this condition is fundamental to intervene promptly with orthodontic appliances to correct the defect before structural deformities of the jaw develop.

Andrea Merlo, owner of MerloBioEngineering, worked on the development of instruments for studying the kinematics of mastication and the activation of the main muscles involved. In particular, he developed a custom-made software capable of collecting and analysing the data recorded by other commercial tools, boosting the already existing protocols for healthy subjects and making them suitable for patients for the first time.

Following two studies that collected normative data on the masticatory cycle and identified the main parameters indicating the crossbite, the working team coordinated by Dr Maria Grazia Piancino of the Dental School of the University of Turin focused on assessing the changes induced by orthodontic intervention on young patients. 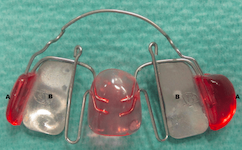 A first preliminary study was conducted in 2007 on a 5-year-old girl, early treated with a functional resin appliance called “Function Generating Bite”, a device designed by Professor Pietro Bracco, at the Dental School of the University of Turin. The analysis of chewing was carried out before and six months after the therapy and indicated a significant reduction in the number of reverse cycles, i.e. those cycles in which the mandible follows a reverse direction of closure.

A larger observational study was conducted in 2016 on 50 children with crossbite, compared with 20 healthy subjects. The participants’ chewing was recorded with the Myotronics K7-I and electrodes placed on the masseters; the data were analysed with Merlo’s software, using the percent difference between peaks EMG of the two masseters as a normalised index of coordination.

Following therapy, the reverse cycles decreased and the closing angle was normalised; the percent difference in electromyographic activity of the bilateral muscles was similar to the control group, indicating a favourable effect on the restoration of neuromuscular control. 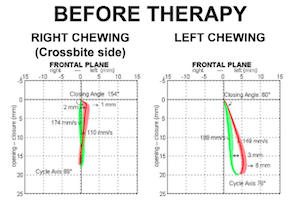 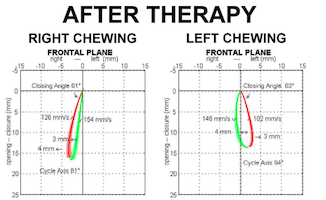 The need for longer follow-ups

Finally, another study involving 47 patients and a control group was conducted in 2017 and demonstrated that, despite the significant improvements achieved following orthodontic correction, the kinematic parameters of chewing did not reach the normative values six months after surgery. It was hypothesised that more time was needed for the central pattern generators to reprogram themselves in a stable and definitive way at central level.

A decade of collaboration with the University of Turin’s Dental School has enabled engineer Merlo to broaden his knowledge of the various fields of application of bioengineering, laying the foundations for what would later become MerloBioEngineering. Thanks to the skills acquired, MBE is now able to develop data analysis software to meet any customer’s needs.

The consultancy section allows you to contact us directly for any request.

This website uses cookies to improve your experience while you navigate through the website. Out of these, the cookies that are categorized as necessary are stored on your browser as they are essential for the working of basic functionalities of the website. We also use third-party cookies that help us analyze and understand how you use this website. These cookies will be stored in your browser only with your consent. You also have the option to opt-out of these cookies. But opting out of some of these cookies may affect your browsing experience.
Necessary Always Enabled
Necessary cookies are absolutely essential for the website to function properly. This category only includes cookies that ensures basic functionalities and security features of the website. These cookies do not store any personal information.
Non-necessary
Any cookies that may not be particularly necessary for the website to function and is used specifically to collect user personal data via analytics, ads, other embedded contents are termed as non-necessary cookies. It is mandatory to procure user consent prior to running these cookies on your website.
SAVE & ACCEPT