INSTRUMENTED NORDIC TEST FOR THE STUDY OF HAMSTRINGS IN FOOTBALL PLAYERS

INSTRUMENTED NORDIC TEST FOR THE STUDY OF HAMSTRINGS IN FOOTBALL PLAYERS

Football players are particularly susceptible to hamstring injuries, especially those related to kicking or sprinting, which involve simultaneous hip flexion and knee extension.

One third of injuries recur with the highest risk during the two weeks following return to sport, due to the prematurity of this or to an inadequate rehabilitation programme.

The instrumentation of the clinical test

Therefore, there is a need to evaluate this set of muscles under dynamic conditions in athlete by means of appropriate tests and equipment.

We applied EMG electrodes on the biceps femoris and semitendinosus of both lower limbs, together with an inertial motion unit (IMU) on the trunk of a professional footballer. This one performed the Nordic Test, where the subject has to counteract the falling force of their body through an eccentric contraction of the hamstrings, while the data was recorded by the equipment and then divided into three different phases. 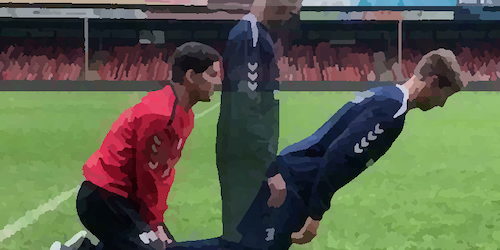 Quantitative data from the EMG signal

By calculating the amplitude ratio with the Root Mean Square, we observed the symmetry of activation of the two homonymous muscles between the right and left lower limbs, providing useful data for a possible preventive or rehabilitation programme. In addition, the differences in activation between the ipsilateral medial and lateral muscles were calculated in order to search for a balanced and synergical activation of the posterior thigh compartment in a training programme.

In this case, the football player’s left hamstrings worked less synergistically with each other than the opposite hamstrings, a fact also highlighted by the poor symmetry between the two biceps and the two semitendinosus of the two different limbs, as it can be seen in the slides.

Finally, we were able to analyse which fibres are most activated: there is a greater percentage of white fibres at the beginning of the movement, while red-slow fibres activate most towards the end of the test, when the eccentric hold has to counteract a greater extensor moment at the knee by the force of gravity.

The analysis of this data can provide useful information for the athletic trainer of a professional team, to operate in prevention from the beginning of the season; or it can give indications to the rehabilitation team when an injury occurs, to gradually manage the return to the field.

This website uses cookies to improve your experience while you navigate through the website. Out of these, the cookies that are categorized as necessary are stored on your browser as they are essential for the working of basic functionalities of the website. We also use third-party cookies that help us analyze and understand how you use this website. These cookies will be stored in your browser only with your consent. You also have the option to opt-out of these cookies. But opting out of some of these cookies may affect your browsing experience.
Necessary Always Enabled
Necessary cookies are absolutely essential for the website to function properly. This category only includes cookies that ensures basic functionalities and security features of the website. These cookies do not store any personal information.
Non-necessary
Any cookies that may not be particularly necessary for the website to function and is used specifically to collect user personal data via analytics, ads, other embedded contents are termed as non-necessary cookies. It is mandatory to procure user consent prior to running these cookies on your website.
SAVE & ACCEPT