The study of a physiological index

Localised myoelectric fatigue is caused by the accumulation of lactates in the muscle that is sustaining work over a period of time.

This is a parameter that can be assessed in athletes, for the study of muscle function in preventive terms or in competitive conditions.

We studied how localised myoelectric fatigue spreads in knee extensor muscles in an elite football player (from the Italian Serie A). Surface electrodes were placed on the medial and lateral vastus and on the rectus femoris; the professional athlete performed an initial assessment at baseline through an isometric contraction, and then performed a tiring workout and repeated the test under conditions of increased muscle fatigue. 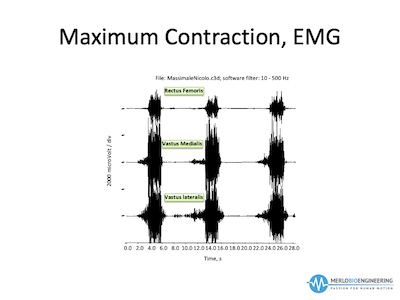 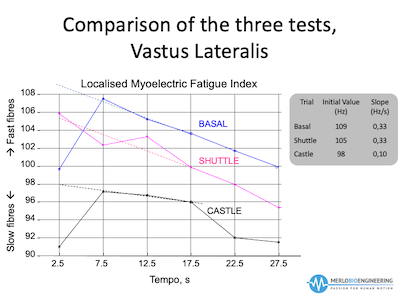 It can be clearly observed that, following strenuous exercise, the fibres that work at higher frequencies, i.e. the anaerobic white fibres, gradually fail. In contrast, the red resistance fibres, which usually work at frequencies below 100 Hz, remain active and still work.

More specifically, it was possible to differentiate the three heads of the quadriceps, observing that the two vastii lose more and more high frequency activations as the seconds pass during maximal contraction, in contrast to the rectus femoris, which accumulates less localised myoelectric fatigue even after some time. 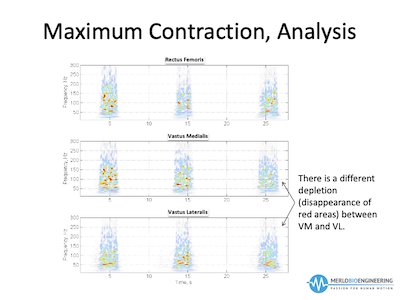 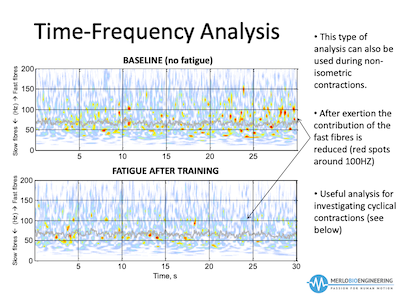 The study of muscle physiology by means of surface electromyography can be an important tool for professional sports teams to build a correct preventive athletic preparation, starting from the initial evaluation at the beginning of the agonistics season; on the other hand, it can be a useful instrument for the rehabilitation team, which must encourage a safe return to athletic activity after an injury, minimising the risk of relapse.

This website uses cookies to improve your experience while you navigate through the website. Out of these, the cookies that are categorized as necessary are stored on your browser as they are essential for the working of basic functionalities of the website. We also use third-party cookies that help us analyze and understand how you use this website. These cookies will be stored in your browser only with your consent. You also have the option to opt-out of these cookies. But opting out of some of these cookies may affect your browsing experience.
Necessary Always Enabled

Any cookies that may not be particularly necessary for the website to function and is used specifically to collect user personal data via analytics, ads, other embedded contents are termed as non-necessary cookies. It is mandatory to procure user consent prior to running these cookies on your website.